Long time no see, eh? Time flies, what do you know…

I am thrilled to still find you here. Honestly, I wasn’t sure this morning if I was about to even find this blog where I left it seven months ago. Cool to find both my blog and you in good shape, patiently waiting for my contribution.

This morning I had a call with a partner asking if it was possible to deploy a control add-in in such a way that other partners could use its functionality from their own extensions. My answer was, and it still is – well, it should be possible, but I don’t know for a fact because I never tried it.

So let’s try it and find the answer together.

(It goes without saying, but I’ve learned that things that “go without saying” often don’t, so let me go with saying it: this is about Extensions V2, NAV 2018, and Business Central; no NAV 2017 stuff here. And no animals were harmed while during writing of this blog, yet…)

To keep my partner safe and anonymous, and stay GDPR compliant in and out, let’s imagine this imaginary scenario: you are building a cool horizontal feature that does “things” in the back end, but also exposes a little bit of front-end sugar for other NAV partners to consume. So you want to make your control add-in accessible to them.

If this was all about pure AL – it’s a no brainer. Your workflow is as follows:

Your partners, who want to tap into your functionality from their extension, need to do this:

If your extension uses publicly accessible stuff, such as a table or a codeunit, or events, your partners can now tap into this functionality from their extension (by reading your table, or calling your functions, or subscribing to your event publishers).

But what if you also make a control add-in a part of your extension? Let’s try it out together.

Creating the “horizontal” extension (the “dependency”)

Let’s get the first part done. The “your” part where you are creating your extension that includes a control add-in to expose to your partners. Your amazing new control add-in will expose a button, that will have a caption of your choosing, and will allow your partners to respond to its click event. Crazy stuff, right?

I’ve got myself a nice and fresh VM this morning from aka.ms/getnav to have access to latest CU (being CU6 from June 6). You may want to get one for yourself, too.

Once it’s up and running, start VS Code, and run the “AL: Go!” command from the command palette. Then choose the “BaseExtension” as its name, select “Your own server” as the server, enter your username (mine was “admin”), enter your password (mine was, whoops, I am not telling you what it was!).

When it’s done, which takes like a half a femtosecond, you have your launch.json file open. Go back to your landing page in IE, or access it from the desktop if you closed it) and copy the last four lines from it (under “launch.json settings” subsection) and paste it inside of your launch.json (make sure to overwrite those same settings in there, which is all settings after “name” and before “startupObjectId”). Also, set the “startupObjectId” to 50100 to run your first page.

If you did it correct, you’ll get something like this:

Now, time for the real stuff. Create a new file and name it “ControlAddIn Base Control.al”

In it, request some real estate from the app, declare a startup script and a “normal” script, then declare a procedure to set a caption on the button, and two events (one to indicate the control is ready, and one to include the implementation for your declared methods). If you care, declare a stylesheet file to make it look nice, too.

If you are as good as I am, yours will also look more or less like this: 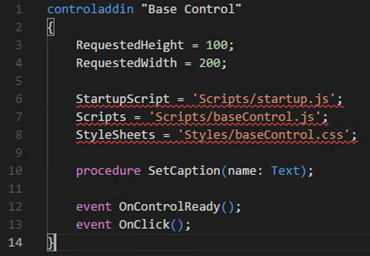 Rats! I am not that good – there’s red stuff in here. Let’s fix it.

Create two folders, call one “Scripts”, and another one “Styles”, and in them, create the files as declared in your control .al file. Mine are “startup.js”, “baseControl.js”, and “baseControl.css”.

Now put beef in these files as indicated in the screenshots below.

This one was tough! It calls the OnControlReady event when the control add-in starts. Now, let’s get the easier ones done, too.

This is your implementation. It contains one function to set caption, as declared in your control add-in object file. It’s not the smartest piece of JavaScript code ever written, but gets the job done. If there is no button, it creates one, sets its caption, and saves the reference for future use. The button, when clicked, invokes the OnClick event, duh!

And last, but certainly the least and entirely optional, add some CSS juice to get rid of Times New Roman:

Finally, let’s test if this works as expected. Create a “Page 50100 Test Control.al” file and populate it with bare minimum of al to try this out: 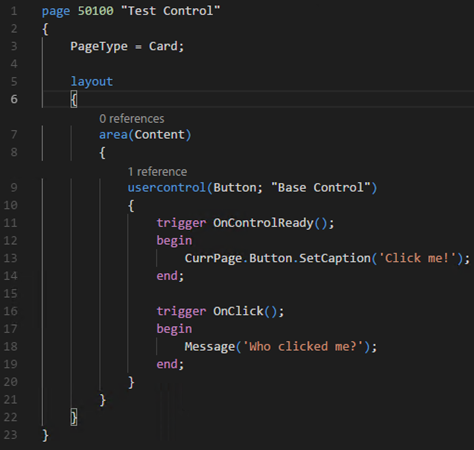 Ctrl+F5, sign in once to deploy your control add-in, then sign in once more to, well, sign in to your NAV, and then perform this complex set of steps: 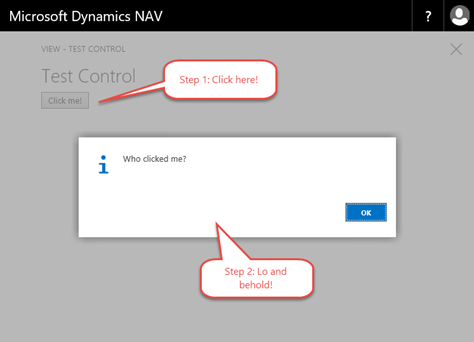 Now, you are good to deploy this to your partners.

Deploying it to your partners

To deploy it to your partners, just do this:

Time to put your partner’s shoes on. You are now not you anymore; you are now your partner, the one who uses your extension. Yes, I confused myself, too, I tend to do this.

First thing, create your extension, the one that will (try to) consume your partner’s shiny button control add-in.

It’s easy, “AL: Go!” once again, follow the same first bunch of steps as you did earlier, up to deleting the HelloWorld.al file.

First step, sort out the app.json manifest file. This time (apart from using a different control add-in range, which should go without saying, but doesn’t, just in case) you need to declare a dependency on the Base Extension you (when you were your partner) created earlier. To do that, use the info from the “app.json” file you received from your partner. This is what I’ve got: 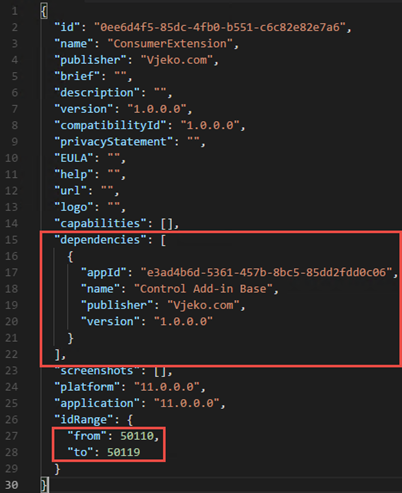 Now, to make it simpler, run the “AL: Download symbols” command, to get the symbols files stored in your package cache path. If you didn’t do anything fancy, it should be right inside your workspace, under .alpackages. Now, select any of the .app files inside your .alpackages folder, press Alt+Shift+R to reveal the .alpackages folder in Explorer, and then paste the .app file you received from your partner right in there together with the two files already in place. Now, if you are doing this from the same machine, that file will already be there, because VS Code was smart enough to download that file together with base NAV files automatically.

Good, now let’s try to see if we can use the control add-in your partner extension exposes.

Create a “Page 50110 Test Partner Control.al” file and add al code to define the page that, well, at this stage, attempts to use your partner’s control add-in. For all I care, it can be the exact copy of the original page 50100 from the previous workspace, save for the object ID and name, which should be 50110 “Test Partner Control”. If you didn’t care more than I did, this is what you have at this stage: 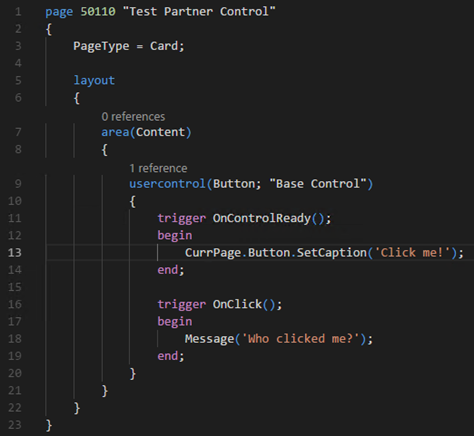 (you may open your eyes now…) 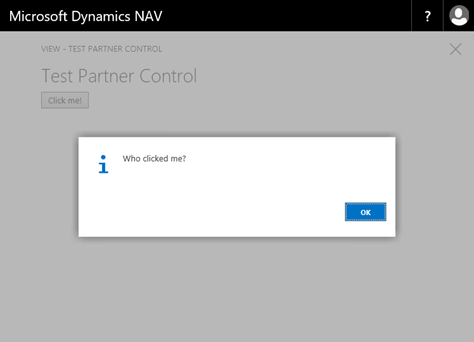 Really, I didn’t expect anything less, but now I know for a fact. And so do you. You’re welcome!

Why doesn’t my jQuery work?