Do you know cues? Those clickable colorless stacks of documents in NAV 2009, that turned into clickable blue stack tiles in NAV 2013 R2, and that worked on top of FlowFields of type Integer?

Everyone is entitled to my opinion, so I’ll openly share it here. If you ask me, the idea of the cues was a cute one but not at all that useful, for a number of reasons. Foremost, in real life scenarios, those stacks grew and kept growing. And once you have any given number of stacks, each showing thousands of somethings inside, they suddenly lose both their appeal and their usefulness. And often you couldn’t really tell: what does a high stack mean? A good thing? A bad thing?

At some point in between versions 2013 and 2013 R2, somebody at Microsoft figured out that now that tiles became all so popular as user interface elements, maybe we could have some tiles in NAV too, and why not show cues as tiles. It was a nice touch that blended perfectly with the new look and feel of NAV 2013 R2.

And finally in NAV 2015 we get real tiles, not only showing a single stack of document based on a FlowField of type Integer and the Count function of some record in some table, but showing any one of the available 21 pictures and any numeric information from any field, or any numeric expression for that matter. Depending on whether they are merely an indicator or a clickable element, they render in blue or gray, respectively, and depending on user configurable scales (per user, per cue object) they also show a colored indicator bar that can take green, orange, red, or gray color.

For example, this is how cues show in the Susan’s role center: 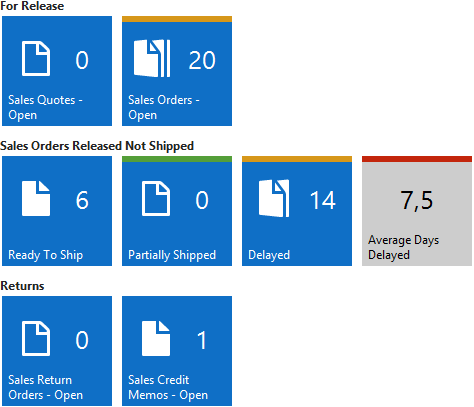 It’s interesting, there are twenty one images available, and Microsoft didn’t put a single one of them on the most prominent role center in the whole application. As I mentioned, in NAV 2015 you don’t have to show only stacks of documents, you can actually show an image, one of 21 available (it’s 22 actually, with the “None” image included) turning the cue into a real tile that carries a more direct meaning than a uniform stack of documents.

Here I’ve bound the RANDOM(50) source expression to 22 cues showing all 22 images, so that you can see what they look like: 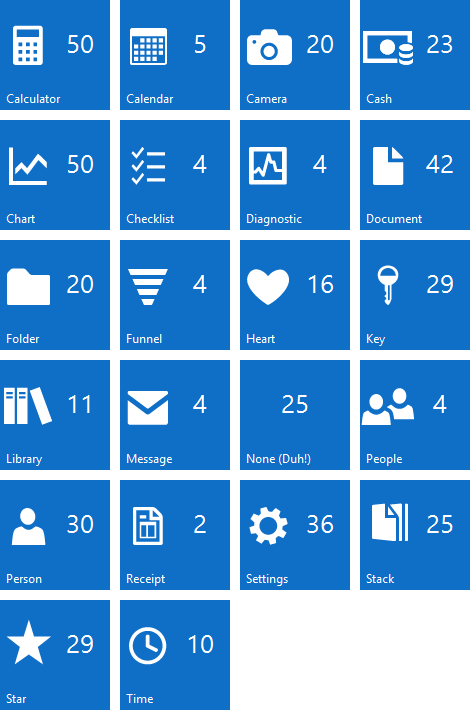 There are a couple of things with these new cues that I don’t like, though:

In all other respects, I really love these new cues and how they work, and I’ll definitely blog more about them in the future.