Out-of-the-box Business Central APIs often use complex types. Addresses on entities and documents, line details, units of measures, journal dimensions, these are just a few examples. There may be more. A typical instance of a complex type looks like this: 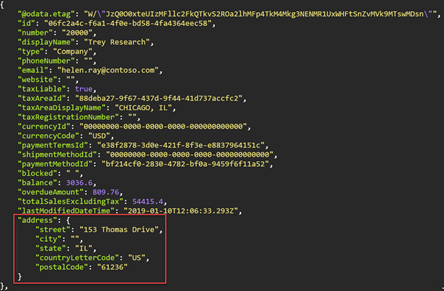 The question is: can you do something like this in your own custom APIs?

And the answer is: yes and no.

Let’s start with the “yes” part of the answer.

END_OF_DOCUMENT_TOKEN_TO_BE_REPLACED

I said a word or two about progress last week. Apparently, VS Code is not the only place where we take a small step back to be able to make a huge leap forward; .NET might seem like another one.

You know it, right? You know that if you want to run your .NET code in D365 for Financials, you are out of luck, and you do know that this applies to as much to Microsoft .NET Framework out-of-the-box types as it does to your own, custom-built .NET assemblies. If you don’t know that yet, then let me bring you up to date: In your D365 apps built on Extensions “v2” technology, you won’t be able to use anything .NET; you simply won’t be able to compile AL code that includes a DotNet variable declaration.

This is neither fake news, nor is it news per se. It has been known at least since October last year when Microsoft first presented AL Language extension for VS Code during Directions US in Phoenix. Soon after the VS Code session there was a round table (in all honesty, I have never seen a table, let alone a round one, at any of round table sessions at any conference) on the topic of .NET future, and the mood was grim. At first everyone thought it was a bad joke, then all held hopes high that Microsoft is simply “feeling the pulse” to see how the channel would react to such a disturbing change. But soon it became obvious that .NET interoperability is on its way to be gently ushered out of the (relevant) technology stack of NAV and that we should start getting ready for the day when it’s not there anymore.

Let’s take them one by one.

END_OF_DOCUMENT_TOKEN_TO_BE_REPLACED

Progress often doesn’t look like progress at all when it first arrives.

When on July 3, 1886, Daimler Benz presented his first car, it had a 0.75 horse-power engine that could reach a top speed of 16 km/h. It was able to cover 45 km on a single fuel tank, and it could only take two passengers. Compared to best horse-driven carriages of the day, especially taking the availability of stuff you could use as fuel, this was hardly a progress. Horse-driven carriages bested this car on all fronts, and by large margins.

Imagine what the world would look like today should Daimler Benz heeded the naysayers and mockers of his day, and they were not in short supply.