If there wasn’t one already, someone should have invented Belgium. There are two things in this world that I love, and probably shouldn’t (and an oversized red speaker’s shirt I got from Luc today did a darned god job at concealing the unlucky consequences of overly indulging in both of them): beer and chocolate. Boy, do Belgians know their beer and chocolate!

But they know their NAV, too, and after NAV TechDays 2011, which have just ended in Antwerp, and two days of top NAV content, I can only say – great job, Luc and the team, and please make it a tradition.

If you attended my presentation about .NET interoperability, then there are a couple of demos I couldn’t deliver due to time constraints, and I promised to blog it. So, here we go.

It’s about streams. You already know that in NAV there are two data types, InStream and OutStream, that allow you to stream data in and out of generic sources or destinations. They are a fantastic tool, because they require you to know nothing about the type of source or destination, and you can store and retrieve data without having to care if the data comes from Internet, or a BLOB field, or is it written to a file, or transported over an XMLport. Stream makes it abstract and allows you to simply handle the data, and make the object itself care about the specifics.

In .NET, streams a bit more complex, or comprehensive if you wish, than in C/AL, and there are specific types of streams which do not exist in C/AL. For example, System.IO.FileStream and System.IO.MemoryStream are two stream types which handle specifically file data, or in-memory data. Luckily, they both inherit from System.IO.Stream, and System.IO.Stream is fully and bi-directionally mappable to InStream and OutStream of C/AL.

If you don’t see a galaxy of opportunities here, then just follow this demo. Let’s make a totally useless, but cool and simple, demo with streams. Let’s stream data from a blog directly into NAV.

1. Create the table and UI in NAV

A chore first, fun later. To store any kind of data in NAV, you need a table, so let’s create one: 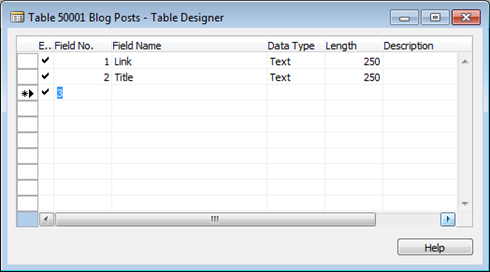 No triggers or anything funny. Just what you see above. Save it, and create a page of ListPart type:

For the last field, set the ExtendedDataType to URL. Just in case, make the page non editable.

Finally, design the page 9006 Order Processor Role Center and add page 50001 Blog Posts as a Part control of SubType Page to the top of the second Group. It’s simple, so no screenshots here. Life’s tough.

If everything was done correctly, this will be your role center: 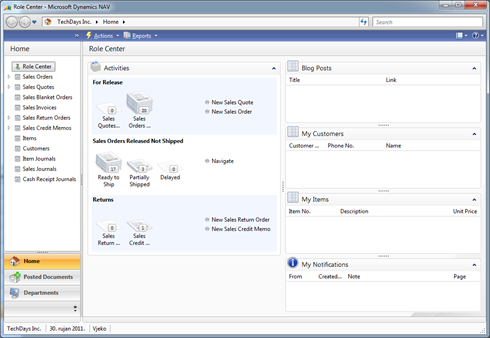 Notice the Blog Posts in the top right. It’s empty, and at this point it’s pretty much by design. Patience, we are almost there.

2. Review the blog stream and create an XMLport

Navigate to http://NavigateIntoSuccess.com/feed/ and take a look at the source. Obviously, a blog’s feed is a simple XML file. So, a million dollar question (only I don’t have that million, yet): how do you import an XML into NAV?

You’ve got it right: the XMLport. A nice little gizmo which lets you model NAV data as XML and then stream it in and out. Apart from them being able to natively snakker XML, there is one particular feature that makes them extremely suitable for this demo. They handle streams, not files. 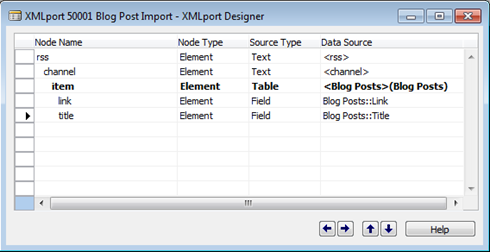 Must have taken all 56 seconds of your life, eh?

There is nothing simpler than this. Create a new Codeunit, save it as 50001 Blog Post Management.

Create a new function called ImportRss, have it receive a parameter called Url of type Text[1024]. Declare a new local variable of type DotNet, call it XRss, and set its subtype to ‘System.Xml.Linq, Version=3.5.0.0, Culture=neutral, PublicKeyToken=b77a5c561934e089’.System.Xml.Linq.XDocument

The body of the function should look like this:

That’s right. That thing will have your feed loaded. If you don’t believe, give it a try. Add the following line below:

To make it work, go back to your page 50001, add the global variable named BlogPostMgt of type Codeunit 50001, and in the OnOpenPage trigger write the following:

Yes, I know – I’ve violated my own hardcoding rules by hardcoding the URL of my blog – but that was on purpose. If I have you make setup for this, I bet you a glass of Duvel and a box of Godiva that you would put some other feed’s URL. As if you can’t change this one, but I know you won’t, will you?

Go. Restart your RTC and watch! I’d put a screenshot here, but it’d be very large and equally as useless.

But now there is a problem. The feed you have in front of you doesn’t exactly match the blueprint laid out by this XMLport, does it? There are plenty more elements in the feed, that NAV or database couldn’t care less about, so there are two choices here: either specify all that unneeded extra info right here in the XMLport (which will take like half an hour of your time, at best), or make a quick .NET function to strip that extra info away.

Since this post is about .NET, and not about stuffing up XMLports, you’ve got it again: we take the .NET path.

4. Create a .NET object to transform the feed

It’s far simpler than it sounds. Start Visual Studio, create a new C# project of type Class Library (or use the Microsoft Dynamics NAV .NET Interoperability Assembly template I give you, for free, at the end of the post in the Downloads section), call it XmlHelper, and create the following class:

The core of it is this simple statement:

Since this is about .NET, and most of NAV folks aren’t too .NET savvy, let me explain how it works. It creates a new XDocument instance (a class which handles XML data in a nice and simple way), and makes it have the same structure as our feed:

It does so by creating a root element “rss”, to which it adds a child element “channel”, and here comes a hefty feature of .NET which is unavailable in C/AL: Linq. It allows you to query a collection and transform it in a single go, so it basically selects all elements of name “item” which are children of “channel”, which is a child of “rss”, and for each such element in that collection it creates a new element of name “item”, and adds two child elements to it: “link” and “title”. I could have done most of this in C/AL using interop and DotNet variables, but it would have required about two dozen variables and two pages of code.
Now compile the new assembly, and copy the resulting dll to your Add-ins subfolder of Client and Service folders of your NAV installation.
5. Complete the import
Now that the scaffolding is in place and we have all the ingredients, let’s complete the import. Back in your codeunit 50001, declare a new DotNet variable, name it XmlHelper, and select this subtype: ‘XmlHelper, Version=1.0.0.0, Culture=neutral, PublicKeyToken=null’.XmlHelper.XmlHelper. Since you have deployed it in Add-ins folder, it is now accessible under Dynamics NAV tab of your Assembly List window. Also, while there in locals list, create a copy of XRss variable, and name it XRssSimplified (it must be of the same subtype as XRss, so copying is the simplest way of achieving it).
Append and modify the code of ImportRss to look like this:
Reload the role center, by either navigating elsewhere, then returning to it, or restart the RTC, and notice the change in displayed message – it now contains only the elements that our XMLport can cope with. We are almost done.
To feed this XML data to our XMLport, do the following: declare a new variable of type XMLport, name it ImportBlog and set its subtype to 50001; then declare a new DotNet variable, name it MemoryStream, and give it the following subtype: ‘mscorlib, Version=2.0.0.0, Culture=neutral, PublicKeyToken=b77a5c561934e089’.System.IO.MemoryStream; and finally a new DotNet variable named Encoding of subtype ‘mscorlib, Version=2.0.0.0, Culture=neutral, PublicKeyToken=b77a5c561934e089’.System.Text.UTF32Encoding
Finally, remove the MESSAGE line of code, and append the following to the end of your ImportRss function:
This is kind of a hacker’s approach, and slightly less readable, but blog friendlier. Otherwise, I would have had you declare a couple more variables, and you’d have to write a couple of more lines of code.
Basically, here we have constructed a memory stream from an array of bytes returned by an instance of the UTF32 encoder class. .NET allows you to do these things easily inline, so I’ve skipped declaring the byte[] (which would otherwise have been a DotNet variable of subtype System.Array, and instantiate the UTF32 encoder instance into the variable.
Having done that, there are no obstacles to assigning the result of the MemoryStream constructor (an instance of a System.IO.MemoryStream class) directly as a source of your XMLport and simply call IMPORT method. Remember, any System.IO.Stream instance or its descendant can be used in place of InStream and OutStream variables in C/AL, or directly assigned in both directions.
Now that the theory is done, restart your RTC, and savor the moment.
There is only one more thing you need to do to make sure it works every time: go back to your XMLport 50001, declare a variable of type Record 50001, name it BlogPost, and add the following line of code to your OnPreXMLport trigger:

There. You can now have your role center nicely adorned with the latest feed from my blog (or any other, if you want to cheat

And last, but not least, here is the ZIP file with all the demos.

I hope this little walkthrough helps you understand the concept of streaming using .NET interop better.