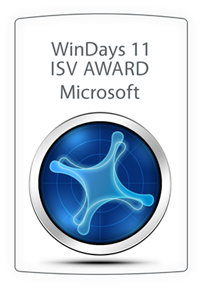 Today, at Microsoft WinDays11 conference, Stratus, the web client for Microsoft Dynamics NAV that I announced here nearly a month ago, has received the ISV Award from Microsoft, being ranked #1 as the solution with highest value for small businesses. Thanks to everyone who participated in the selection process, you made a smart decision, and you know it

As much as it was difficult for me to keep this award stuff secret over the past week that I’ve been officially notified by Microsoft as having been selected as the winner, it is equally difficult for me to announce two other big news, which I’ll just have to keep secret until Wednesday.

A lot of you have asked me about Stratus over the past month, and I know that I missed the deadline I announced for opening Stratus for general public testing on March 31, but I’ll offer a plausible excuse: the things developed much quicker than expected and my company has started negotiations with some true hot-shot companies about marketing and deploying this solution. Unfortunately, due to this, we had to postpone the plans, and push the release date a bit forward, but I’m sure this won’t be much. A couple of weeks, at most.

If you here, in Rovinj, don’t miss my presentation on Wednesday at 10:10AM, it’ll be around cloud opportunities with NAV and Stratus will be a part of the talk. But I won’t just talk the talk, I’ll also walk the walk, so you’ll be able to see Stratus in action, deployed in the Cloud. I’m looking forward to delivering it and seeing you there!

Can Microsoft Dynamics ERP move to the cloud?