Handling an error means taking necessary steps to continue execution after an expected error occurs. And these steps can easily depend on the context of the error. There is quite a difference between a division by zero, and a TESTFIELD failure.

Take a look at this useless code: 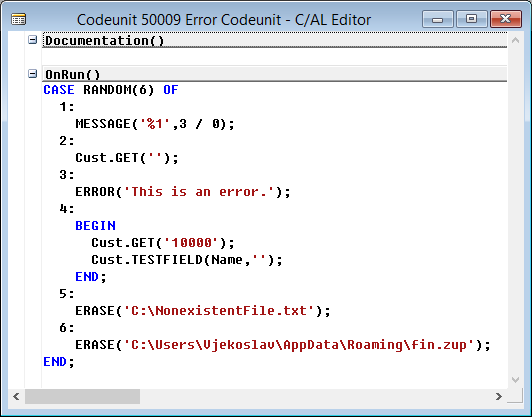 It does nothing but fails in six completely different ways, depending on the actual processor mood. They are, in order of appearance:

When you call this codeunit with the IF CODEUNIT.RUN construct, you will capture the error, but handling it may become tricky. In versions earlier than 2013, you could only check the GETLASTERRORTEXT function to see if you can parse out some text out of it in a smart way, but it was usually an exercise in futility, because of possible multi-language environments – it always gives you the error message in the end-user language. In 2013 we’ve got the GETLASTERRORCODE which was language-independent, and it always used the same code for the same exception type, making error handling simpler. However, it still had shortcomings.

In NAV 2015, we get a new error handling function: GETLASTERROROBJECT, and I just love its signature: 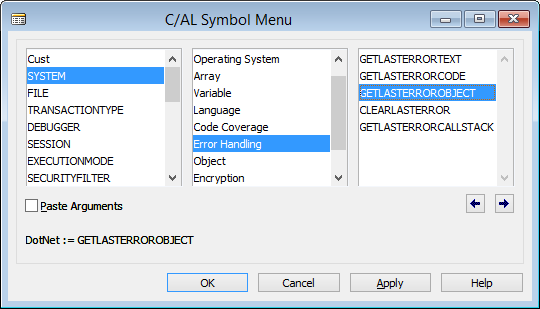 It returns a DotNet, and if you don’t immediately know which one it is, let me tell you – it’s the System.Exception type.

Now we are talking business.

The difference is substantial. Even though in NAV 2013 you could use the GETLASTERRORCODE to get a (fairly) unique error code for each different type of error, receiving the actual exception object gives at least these two important benefits:

In any case, exception handling is an important topic, and I see it has been for better part completely ignored by NAV bloggers. That’s why I have decided to release a series of blog posts about handling exceptions in NAV 2015 (some of it will apply to earlier versions). I hope you find it useful.