In my two last posts, I laid out the technical design of the Preview Posting feature, and then showed how to simplify its design to get around the unwanted behavior of TryFunction.

One thing is obvious from these posts: Preview Posting wants to simulate posting of a document (or journal) to show what the results would be, but without leaving any actual trace in the database. In database lingo – we want the transaction to be rolled back.

Rolling back is no brainer. Simply throw an error, or do a silent abort, Except if there is COMMIT. In that case, no rolling back helps.

I have announced earlier that my today’s post will be about how to nest transactions in C/AL so that an inner COMMIT has no effect on the transaction as a whole, which can still be successfully rolled back.

Nested transactions are nothing special for SQL. Take a look at this T-SQL batch: 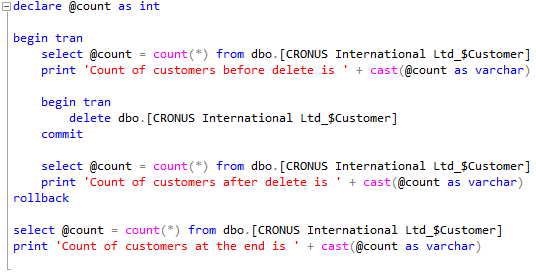 When you run it, you see this:

Or, at least, it used to be that way all the way up to NAV 2013. Starting with NAV 2013, you can nest transactions, but you need to pull a clever trick: you need to call into the testability framework.

Now, I know that testability framework is not intended to be used in scenarios that I am about to describe, and it’s also not widely familiar to developers, so give me little latitude here.

With the None option, each test function runs inside as an isolated transaction which is committed at the end of the test. If the test succeeded, any data it wrote is persisted in the database. If there was a COMMIT anywhere in the test (and provided you didn’t change the TransactionModel property of the test function) then data up to that point is committed, and a new transaction is started. If the test fails after that point, data that was committed, is persisted. It behaves exactly as you would expect C/AL code to behave.

However, with Function and Codeunit options, each test function, or codeunit, respectively, are wrapped into an outer transaction, which is rolled back at the end of the test function (or test codeunit) execution. Regardless of whether a test succeeded or failed, the transaction is rolled back, and no data is persisted. Even if there was one or more COMMITs anywhere inside the code executed by the test, everything is rolled back. This is possible because to enable this feature, NAV makes full use of SQL Server transaction nesting capability.

Let me now put a big, fat, stinking disclaimer here: I am not recommending you to use this approach – I am simply using this example to show that concept of nested transactions is not foreign to C/AL and that you can easily put it to practical use if you need it. The testability framework is designed to be used solely for the purposes of unit testing and was not intended by Microsoft to be used in production. All code it executes will still happily run in production, but Microsoft will always officially discourage such use, and will never want to provide any support for anything that results out of its use.

So now that you know that you shouldn’t try this at home, let’s redesign the Preview Posting feature so that it takes advantage of transaction nesting in C/AL through testability framework.

This is what we’ll need:

First, create a new codeunit, set its Subtype to Test, and add the following code: 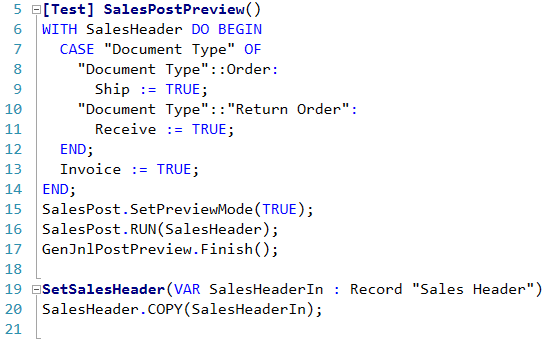 It uses one global variable of type Record 36 and a function to set this variable from the test runner codeunit.

The test function is a simplified version of the part of the Code function in codeunit 81, except it also calls the  Finish function in codeunit 19 – something that normally happens a bit later in codeunit 19. We need it here, because at this point data is still in the database, and not rolled back by the test runner. Also, we don’t really need the PreviewMode, because we don’t care if any COMMIT is called, but without it – even though everything is correctly rolled back at the end – there is a distinct peculiar behavior if preview mode is not set, that I’ll explained later.

Now, create another codeunit, set its Subtype to TestRunner, and add the following code:

It has one global variable for Record 36. You first must set this variable through the call to SetSalesHeader.

OnBeforeTestRun always returns TRUE because you want to run all the tests. This trigger will run twice: first time for the test codeunit, and the second time for the SalesPostPreview function.

In OnAfterTestRun we simply throw any error that happened during posting. If there was an error, the user must see it.

Make sure to set the TestIsolation to either Function or Codeunit – it doesn’t really matter, as long as it is not None.

Now, let’s go to codeunit 19, and make a minor change: 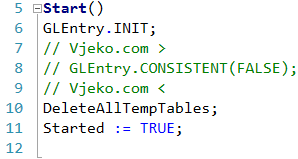 The only purpose of this CONSISTENT call was to prevent accidental COMMITs. Since we don’t care if there are any COMMITs, we don’t need this.

And finally, codeunit 81, and it’s Preview function. I won’t comment and then insert, because I am fully rewriting it, so the following code example doesn’t follow commenting best practices:

In here, we start the preview, then set the sales header on the test runner and then run the test runner. Test runner will run the posting wrapped in an outer transaction, which it will duly roll back at the end. Finally we show the entries collected inside the test codeunit.

And that’s all. When you run Preview Posting, you get the preview of the posting results, and no trace of any changes in the database.

(One issue: when you comment out the SetPreviewMode function, then the sales header record is deleted as a part of the posting procedure. Even though it is rolled back at the end, NAV will close the sales order page, and hide the preview-posted order from the order list. Pressing F5 will show it again. Since this is undesirable for preview posting, I kept the preview mode in place.)

Now that you have seen how it works and why, I’ll once again re-state that this is not really how Preview Posting should have been originally designed. The reason why I showed this is to:

Now that we have seen this example of Preview Posting implemented in three different ways – none of which is perfect – we must agree that both of these claims are true:

I believe you already agree with me that TryFunction is not implemented the right way and that it’s behavior of not rolling back data and allowing you to commit data after an error is plain wrong. There are several ways of properly implementing it, and we can argue about those, but my suggestion of the implementation of the TryFunction feature would be the following:

This would make a lot of sense.

Second – there is no need for the dirty CONSISTENT trick or any other trick for that matter. CONSISTENT(FALSE) only makes sure that no COMMIT is hit inside a try function, because that is really disastrous (with the current behavior of not rolling back stuff). With inner transactions and concept of uncommittability, this problem is solved.

On top of that I propose to introduce two more C/AL functions:

These changes would take care of all the problems we currently have with TryFunction.

Now, I must admit that I didn’t analyze all the TryFunctions Microsoft put into standard application code. There might be a legitimate reason for a TryFunction not to rollback data, and maybe there is a legitimate reason to allow persisting data to the database even in case of error. If this is really true, then I would propose some more behavior changes:

With this I rest my case about TryFunctions and transaction integrity. I hope I have proven my case beyond any reasonable doubt, and I hope there is still time for Microsoft to reconsider the existing behavior.